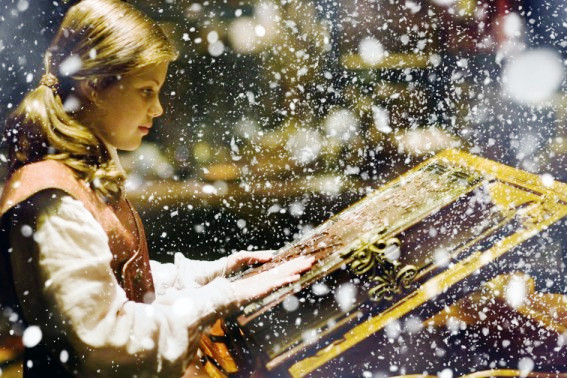 A flash review by Jonathan English

Said to be an admirable children’s story but not more, The Voyage of the Dawn Treader contains depths calling for reflection. Yet some have missed these depths. Indeed, one weakness of the film is its compressed, edited storytelling, leaving little time for reflection or anticipation. Largely episodic in nature, the movie should point to the arc of the story more to build expectation, to remind viewers of the promised, mysterious, hoped for destination. This is more than “a series of opportunities for special effects,” as one critic said.

C.S. Lewis, the book’s author, was a literature professor who every year reread the epic sea journey of The Aeneid, in which the hero, Aeneas, is an exemplar of pious duty. Unsurprisingly, the story raises deep questions: What is human nature and the human condition? Why this problem with evil? How do we attain virtue? And redemption? How do we reach Aslan’s Country? As often occurs in the Chronicles of Narnia, the new explorer in Narnia is exposed for who he truly is–the mask that grins and lies comes off–and it takes intervening love to transform the poor boy Eustace into the hero he was meant to be. But Eustace is not the only one who struggles. Lucy and Edmund are not immune; both endure their own temptations, briefly indulging their own errors on the road to character. The internal good versus evil struggle is fitting, and seems to reflect the author’s point elsewhere that the struggle is played out in everyday competition between virtue and vice. Still, for the sake of the story, at times viewers may wish the overt action involved greater jeopardy, more sustained, with darker dangers of evil. Though this is a children’s story after all, in some instances, it seems the heroes prevail too easily. Likewise, the movie glides over Eustace’s key encounter with Aslan. The book is deeper and its world more detailed, as often is the case. (And one rather minor detail of the movie seems logically flawed–why would the monopod creatures, possessing only one foot as they do, have either a left or a right foot?)

Nevertheless, quibbles aside, the voyage is a visionary tale of dragons lurking within, daring discovery, camaraderie, and moral discernment. Ultimately, the story is about making the unseen seen, to borrow from the words of one of the characters. And what is seen in the film is beautiful. The beauty of the film, with its cinematography accommodating 3D, is worth seeing. Just don’t let it displace the book–the deeper, fuller, authentic voyage.